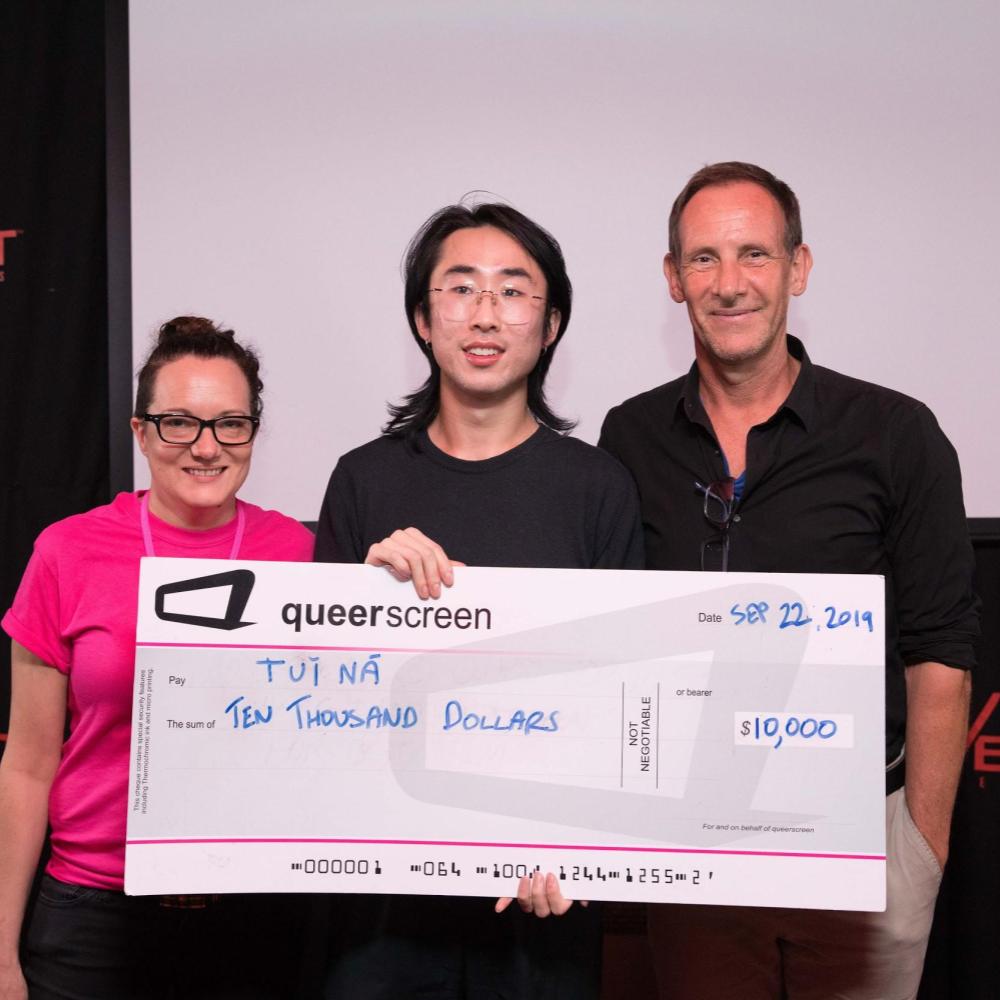 An evocative film about a young boy reconciling his filial duties with his sexuality has won the second Queer Screen Pitch Off, which was held as part of Queer Screen Film Fest 2019.

Writer and director William Duan’s film TUĪ NÁ was the recipient of $10,000 in funding after the creatives behind our seven finalist projects had each taken to the stage to sell their ideas to our panel of judges. Each group had five minutes to explain their project and give an indication of how they’d use the money to make their film a reality.

And while pitch topics covered everything from a young man with Asperger’s Syndrome navigating the dating scene, and some stressed out new gay dads, to a lesbian couple separated by an impending wedding , it was Duan’s film that ultimately won out. “This means so much,” said Duan upon winning.

“I feel like I’ve never seen stories like my own on screen before. We’re living in such a divided world these days and intersectionality is so important because it’s a vessel for empathy. And empathy really helps with bringing the world closer.”

“I feel like I’ve never seen stories like my own on screen before,” the Melbourne based filmmaker said. With his film covering both issues of his lead character’s sexuality as well as his relationship with his immigrant Chinese mother, Duan said putting such a narrative on screen was important to him. “We’re living in such a divided world these days and intersectionality is so important because it’s a vessel for empathy,” he said. “And empathy really helps with bringing the world closer.”

He also explained that putting together a diverse production team behind TUĪ NÁ is also something he and the film’s producer Christina Radburn are very keen to ensure through the completion of the project. “We’re seeing a lot of diversity in front of the camera these days, but the same thing hasn’t happened behind the camera, so me and Christina are really, really excited and committed to having queer people of colour work on the project.”

Duan’s pitch itself was quite simply told, and very moving. From the judges’ perspective, Ian Thomson said that it was how clearly the story was something authentic to Duan that made his presentation have such an impact. “During the pitch he spoke of his own personal journey as a gay Chinese man growing up in Australia, and on one side being deeply connected to the culture of his origin through his strong bond with his mother and grandmother, and on the other his attempts to step out into the gay world in young urban Australia,” Thomson said. “It was this deep connection with the subject matter that gave us a strong sense that William will be able to create a moving and contemporary story from an authentic perspective.”

“It was this deep connection with the subject matter that gave us a strong sense that William will be able to create a moving and contemporary story from an authentic perspective.”

She admitted however, that it was far from an easy process, with all of this year’s Pitch Off finalists of a high calibre. “It was a really tough decision, genuinely,” she says. “They were all incredibly amazing, and I would actually like them all to be made.”

As part of the prize, Duan and his team will have just over 12 months in which to deliver TUĪ NÁ and we can’t wait to see the end result!

Click here to read about all seven of the final projects at this year’s Pitch Off.